Air New Zealand Business Premium and its Premium Economy offering and are now both available on most of its trans-Pacific fleet; including the 777-300, 787-9 and 777-200 planes, and if you’re looking for a bit of long haul luxury, I can give you several reasons to splurge.

First of all, there are some great deals for both being promoted at the moment well worth looking out for, and depending on your budget, you’ll be pretty happy with your choice.

I recently flew SYD to SFO via AKL, Premium Economy for most of the way, with one very happy stint in Business Premium and I’m pretty impressed with both.

Oh – and if you’re concerned about that stopover in Auckland making the trip too long to bear, fear not: Koru Club is here.

I’d already sampled the Air New Zealand hospitality at the Sydney lounge, arriving a couple of hours early so I could have breakfast before my flight, accompanied by a glass of sparkling wine – the best way to start a long-haul journey.

The Auckland stopover en route to SFO is less than two hours, barely enough time to sample all the fine New Zealand wines, cocktails and craft beer in the Koru Club lounge. I could happily sit here for several hours, nibbling on the frequently rotated hot and cold food at the buffet bar, while streaming Netflix on the (FAST) free Wi-Fi.

Long haul is a lot easier with loads more leg room (the largest seat pitch in its class) on luxury leather seats, but what’s really special (apart from the friendly Kiwi service) is the food. Gourmet dishes like Harissa lamb shank with sumac yoghurt dressing and seared hapuka in miso coconut broth.

In fact, this is what Business Class used to be like not so long ago, and on older fleets, what it is like still. The selection of entertainment on your LARGE seat back TV is extensive – movies, documentaries and TV shows, certainly a greater choice most airlines I’ve flown.

The seat reclines, the windows (on some fleets) can be dimmed to your suiting, and we’re given real pillows, so you can expect to get a fair few hours of sleep on the way, but be sure not to sleep through breakfast because it’s seriously good food.

If you really want to travel in luxury, you have to try Business Premier.

Each spacious Business Premier capsule transforms from armchair to a lie-flat bed that promises ‘the best sleep in the sky’ and again, the menu is better than a lot of 5-star restaurants. Your menu may include dishes like za’atar wood roasted chicken with saffron-soused onions, or beef short rib with mashed mascarpone potatoes, cumin roasted carrots and radishes with parsnip chips.

I didn’t get to try out the lie-flat bed as my only experience was a lucky upgrade from AKL to SYD on my return flight, but I did recline to an almost horizontal position so I could curl up and watch a movie on my enormous TV (even bigger than Premium Economy), snuggled under my doona.

That is, after eating my second breakfast for the day, ancient grains-muesli with organic yoghurt and fruit salad accompanied by a berry smoothie, followed by a delicious breakfast quesadilla with smoked bacon, melted cheese, avocado and crème fraiche.

But then there’s the service…

The Air New Zealand inflight crew provided excellent service in both Premium Economy and Business Premium. Drinks (and snacks if you could possibly fit them in after the enormous inflight meal servings), are ordered via the seat back menu and delivered promptly. Service is always with a smile, quite often a joke (particularly from the captain) and an update on the rugby results on landing.

Only failing. Lounge access at San Francisco International for Koru Club members and Business Premium passengers is provided by Singapore Airlines, and the lounge has seen better days. The standard is nowhere near the level normally provided by Air New Zealand. If you have club access to an alternative lounge, take advantage of it.

From Massachusetts to Miami, the Oyster.com team of intrepid travellers has done the research and uncovered (excuse the pun!) some of America’s little-known nudie beaches, said to rival their more famous European counterparts.

The USA is a country not exactly renowned for embracing public nudity – or not in the same libertarian vein as many Europeans – so you may be surprised to discover that naturists (people who are comfortable getting their kit off!) can find their own slice of summer beachside heaven in America at a handful of beaches that, if not sanctioned, are at the very least unpatrolled!

Here’s Oyster.com’s pick of 8 Amazing Nude Beaches You Can Find in the U.S.

“Yes … seated across from me was a pet owner and small French Bull Terrier, who made only three appearances from his pet carrier to accompany his owner to the bathroom during the 16-plus hour flight.” 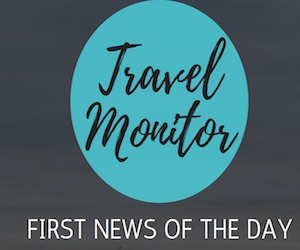